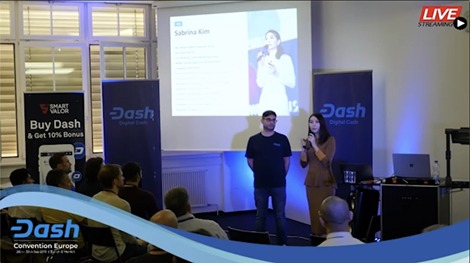 CEO Sabrina (right) is giving a presentation on expanding the user base of Dash using Dash Debit Card of Blucon.

The three-day event was programmed with three separate themes of Dash Co-Working, Inside Dash, and Dashtoberfest. Especially, the Inside Dash is focused on commercialization within Dash and efforts concerning the ecosystem.

It is highly exceptional to see a third-party project among the presenters, who are mainly from the top nodes of Dash. CEO Sabrina Kim gave her presentation titled “Pushing Dash Adoption via Crypto Debit Card” to promote Dash among the general public through the Dash Debit Card of Blucon.

Also, during the presentation, she gave a demo of Blu-Pass Ver. 0.5, which is currently being developed by Blucon.

The 0.5 version of the app is being developed so that the Exo-Platform of Blucon can be synced with the Digifinex exchange. With this, the holders of Dash may deposit their Dash coin on their Dash card directly, so that once the registration and deposit process is over, all the users have to do is to tap the card to spend the money.

With this demonstration, she showed that the sync with Digifinex exchange was effectively online, while the deposit and payment could be completed in less than a second, demonstrating an easy and fast way to spend the coins. The presentation was positively received by the members of the Dash community at the scene. There were actually people asking questions on the future launching schedule. The 1.0 version of Blu-Pass of Blucon is to be  introduced during IFIC2019 Seoul Summit, with an overall demonstration connecting the exchange and the banks due to the completion of Exo-Platform.

During the presentation, they discussed using Dash Card for paying the hotel chains or Uber taxi. And, there were several propositions for syncing with Dash application. Also, the ministers of Dubai and Bangladeshi, who joined via video-conferencing, suggested the local introduction of Exo-Platform, as well.

The launching of Dash Card, which will further push up the general adoption of Dash coin, is enjoying enthusiastic reactions. More members of Dash pledged to join IFIC2019, and Felix Mago, who is an adviser of Blucon, agreed to participate as the founder of Singapore incorporation of Blucon, to further her support in the works related to Dash.

IFIC2019 is scheduled to be held at Grand Hilton Seoul on October 14. Further details can be found on the website of Blucon and On-Off Link.